← more from
Profound Lore Records
Get fresh music recommendations delivered to your inbox every Friday.
We've updated our Terms of Use. You can review the changes here. 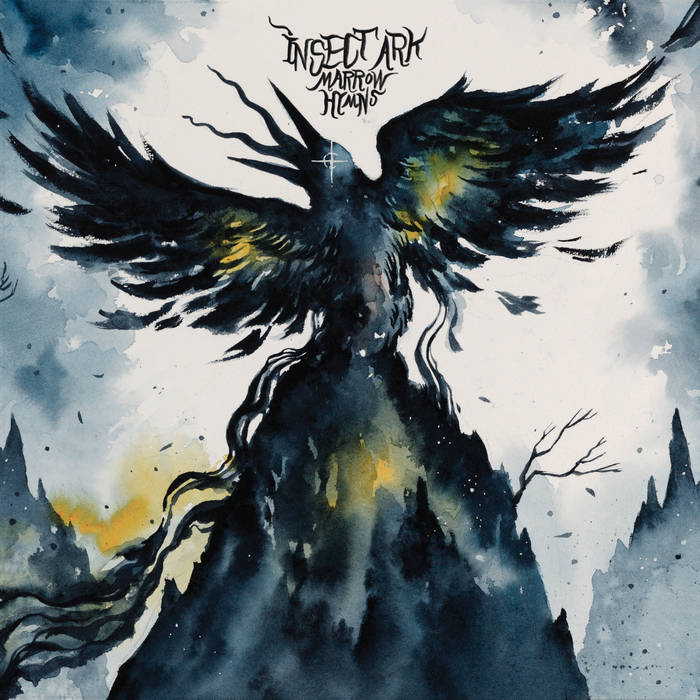 rikm My first introduction to Insect Ark was at the Intersections Festival in Toronto this past summer, and I was truly impressed by the depth of their sound and the emotions they evoked over the course of their set. "Marrow Hymns" lives up to and surpasses my initial
impressions and inspires me to delve deeper into their back catalogue.

Dave Aftandilian Behind the night sky yawns another horizon, blacker and colder. In the pale hours you feel its tentacles slide behind the moon, dripping down into the alley's grime where you lie quivering. Yet as its ichor slowly fills your eyes and ears and nose and mouth, you feel a strange elation; a freedom found in emptiness and loss and despair. Welcome, and goodbye.

N.J.S Doom metal meets horror movie soundtracks in the best possible way. This will suck you all the way in, and have you checking your window wondering what that weird noise was. Love the electronic elements, they add a ton of depth.

Combining elements of horror-film soundtracks, psychedelic doom, and atmospheric noise, INSECT ARK is comprised of Dana Schechter (bass, lap steel guitar, synthesizers) and Ashley Spungin (drums, synthesizers). INSECT ARK’s intensely visual music weaves interludes of fragile beauty with crushing passages of swirling doom, spinning like a backwards fever dream. “Marrow Hymns” is a wordless song, a hypnotic voice that screams and whispers from a place deep in the furrows, from the bones, from the blood. Defying easy categorization, INSECT ARK’s uncommon sound is in part the amalgamation of these two women’s passions: Schechter’s sinister bass lines and unconventional use of lap steel guitar (and her complete omission of electric guitar), and Spungin’s lucid, exacting drumming and synth work with her own hand-built analog noise pedals (Ormus Electronics).

“Marrow Hymns” was recorded and mixed with engineer Ethan Donaldson at Mozart St Studios in Brooklyn, NY, over the course of eighteen months. With the two halves of INSECT ARK residing on opposite coasts, the album was largely skeletal in form upon commencement of recording. Overdubs and further writing/arrangements were done after Spungin’s return to Portland in the isolation of Schechter’s home studio. The sense of distance and vast emptiness remained intact in the songs, built out over many long nights.

“Marrow Hymns” song themes of displacement, loss, and isolation are personal journals of that time period, as both members found themselves simultaneously experiencing existential crises. However, the album also tells a story of strength and determination, made from the marrow of these two women, a song for all things that struggle to survive.

Formed in 2011 by Schechter (who has also been part of bands such as M. Gira’s Angels Of Light, Bee and Flower, Zeal & Ardor, Gnaw, and cult Bay Area math rock band Gifthorse which was Jef Whitehead of LEVIATHAN’s first active band) as a solo project, from its inception Insect Ark has been about creating work that transports, both physically and psychologically. Spungin (Taurus, Purple Rhinestone Eagle, Negative Queen) joined in 2015 for touring support of “Portal/Well” and over the next year, Insect Ark became something much greater than the sum of its parts. Both women have roots firmly in making work with no borders – they are DIY makers, multi-instrumentalists, gearheads, and visual artists. Spungin studies live sound, studio recording, programming and analog electronics; Schechter composes music for film and is a video maker/animator for film/TV. A full-length video counterpart for live shows is to come shortly, integrating sound and visuals to build immersive sonic landscapes that echo in the empty spaces where the earth divides, offering the listener - and the band themselves - utter sensory submersion.

Bandcamp Daily  your guide to the world of Bandcamp

Guests John Beltran and Kim Myhr walk us through their magical musical adventures.